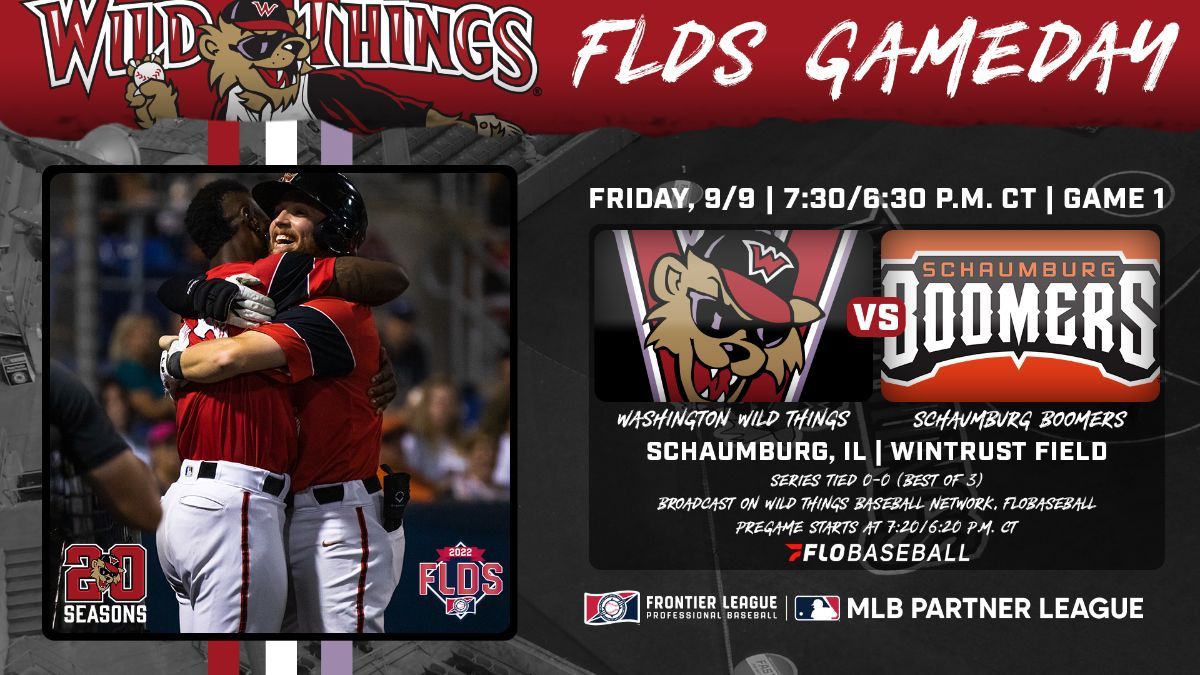 WASHINGTON, Pa. (September 9) – The 2022 Frontier League Playoffs are underway and with both wild card matchups complete, the four remaining clubs left playing for the ultimate Frontier League prize have set their sights on the Frontier League Division Series matchups. In the West, the West Division Champion Washington Wild Things get set to square off with the Schaumburg Boomers in a rematch of last year’s five-game Frontier League Championship Series.

The Washington Wild Things are coming off their eighth division title in franchise history and a 62-34 season. The 62 wins were good for the second most in franchise history behind only the 2005 club, which won 63 games in 95 times out. Washington set a new club record for doubles in a season and spent every day after June 21 in first place in the West, after bouncing between second, a tie for first and first for a few weeks prior to that.

The Things were paced by Nick Ward offensively, who clubbed a career-high 19 home runs and drove in 61 in the regular season. Ward was third in the league in batting average (.349), 1st in OBP (.478), fifth in slugging percentage (.620) and fifth in walks drawn (63). Wagner Lagrange posted a .346 batting average in the regular season with seven home runs and 62 RBI. He pounded out 40 multi-hit games and 125 hits in total, matching the club record set by Lance Koenig in 2005 with that amount of hits. Several Wild Things’ hitters had .300+ batting-average campaigns.

As a staff, Washington’s pitchers were the fifth best staff in ERA at 4.08 and walked the fifth-fewest opposing batters at 316. The Wild Things had three pitchers reach at least eight wins, with Rob Whalen’s 12 leading the way. His ERA was the eighth best in the league while teammate Sandro Cabrera posted an 8-4 record and a 3.42 ERA, the seventh best in the league. Lukas Young’s 20 saves were tied for second in the league.

The Boomers, meanwhile, fresh off a victory in the West Division Wild Card Game over the Evansville Otters 5-1, finished 53-43, good for second place in the West. Schaumburg’s offensive numbers for the most part were in the middle of the pack in the league with a few exceptions. The Boomers drew 442 walks, a new team record and set new club marks in triples and homers. Alec Craig walked 92 times and Braxton Davidson reached via walk 79 times. Chase Dawson set a new league record for triples in a single season with 24. Mike Hart poses a power threat as well, as he slugged a career-best 19 homes in 51 games. Clint Hardy is the new Boomers’ RBI king.

The pitchers for the Boomers set a new Frontier League single-season record with 921 strikeouts, which included 117, a new team record, from Shumpei Yoshikawa.

Kobe Foster, the 2022 Frontier League Jason Simontacchi Award winner for Rookie of the Year, will make his pro playoff debut on the hill in game one. He was 8-1 during the regular season with a 1.00 ERA in 11 games (10 starts) and did pitch once against the Boomers. In Washington’s August series in Schaumburg, Foster got the lone win of the three-game set by tossing six innings of shutout ball. He allowed just one hit and it came in the sixth inning. The southpaw is coming off a seventh straight win in decisions, August 30 at home against Evansville, where he spun seven innings of one-run ball.

Luis Perez will make the start for Jamie Bennett’s Boomers. He’s made 13 appearances (three starts) for Schaumburg this season after starting the year with Gastonia in the Atlantic League. In 26 innings, he’s allowed 34 hits, given up 25 runs (20 earned), walked 18 and fanned 19. In a start against Washington on August 25 at Wintrust Field, the former Baltimore Orioles’ farmhand walked seven and yielded three hits in 4.1 innings. Washington scored four times against him, with three of those runs being earned.

During the regular season, Washington won five of nine meetings between the clubs, but of the nine games, five were decided by two runs or fewer. Washington won four of the first five and Schaumburg has taken three of the last four.

Washington’s 11th Frontier League playoff trip begins with Game 1 of the FLDS tonight at 7:30/6:30 p.m. CT at Wintrust Field. The series shifts to Washington after the conclusion of game one, with Game 2 slated for Sunday, September 11 at 6:05 p.m. The lower level is sold out but tickets are still available at wildthingstickets.com. Game 3 would be played Monday, September 12 at 6:05 p.m., if it is necessary in the best of three series. The winner will get the winner of the East FLDS played between Ottawa and Quebec.