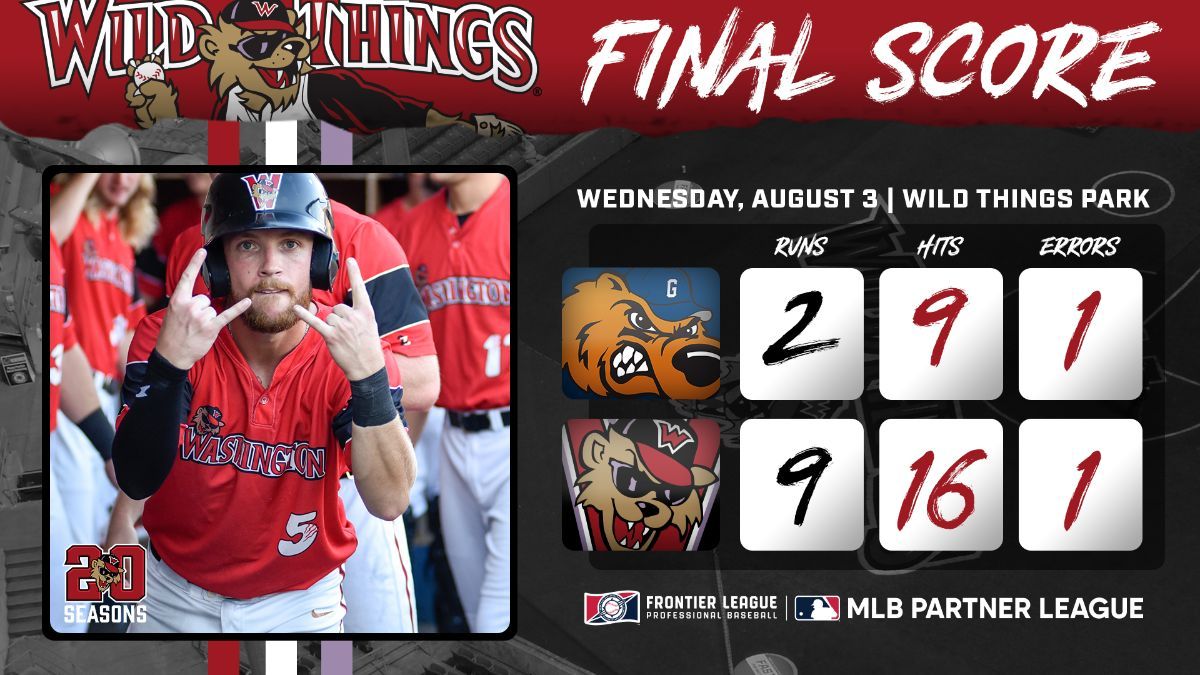 WASHINGTON, Pa. (August 3) – The Washington Wild Things bounced back against the Gateway Grizzlies 9-2 on Senior Slugger night. The game featured nine unanswered runs by Washington on offense and four double plays on defense. This win is number 100 for Tom Vaeth as manager of the Wild Things.

Washington was in the hole when Sandro Cabrera gave up a two-run home run in the fourth as the first runs of the game. The defense held after this, giving the offense time to come back strong. Jared Mang hit a two-run RBI single in the fifth to tie the game, and Wagner Lagrange hit an RBI single after to take the lead 3-2 at the end of four.

The scoring continued in the seventh, as Lagrange hit a groundout for an out to extend the lead and Andrew Czech lifted a sac fly to push it up one more. A few plays later, Ian Walters hit a two-run homer to make it four runs that inning and a 7-2 lead for Washington. Nick Ward followed this with an RBI triple in the eighth, making it home as the final run a play later with a sacrifice fly by Mang, making the score 9-2.

Landen Smith, making his Wild Things’ and pro debut, came in to close the game. It was three up, three down, as Smith struck out the first, Tristan Peterson caught a pop fly by the second batter and Scotty Dubrule threw out the third batter at first to end the game.

Cabrera pitched seven innings in his start. He allowed two runs, eight hits and struck out seven for his seventh win this season. Christian James relieved Cabrera to start the eighth, allowed one hit and struck out one.

As for Vaeth’s 100th win, he’s the third fastest to 100 as the Wild Things’ skipper, behind wins leader John Massarelli and Jeff Isom, whom Vaeth has tied for third all-time in wins. Tom is 100-64 as skipper of Washington now.

Washington (44-24) and Gateway (33-35) will decide the series tomorrow night for Thirsty Thursdays presented by Stoney’s. First pitch is set for 7:05 p.m. Tickets can be found at wildthingstickets.com.