Wild Things Jump All Over Boulders on Opening Night 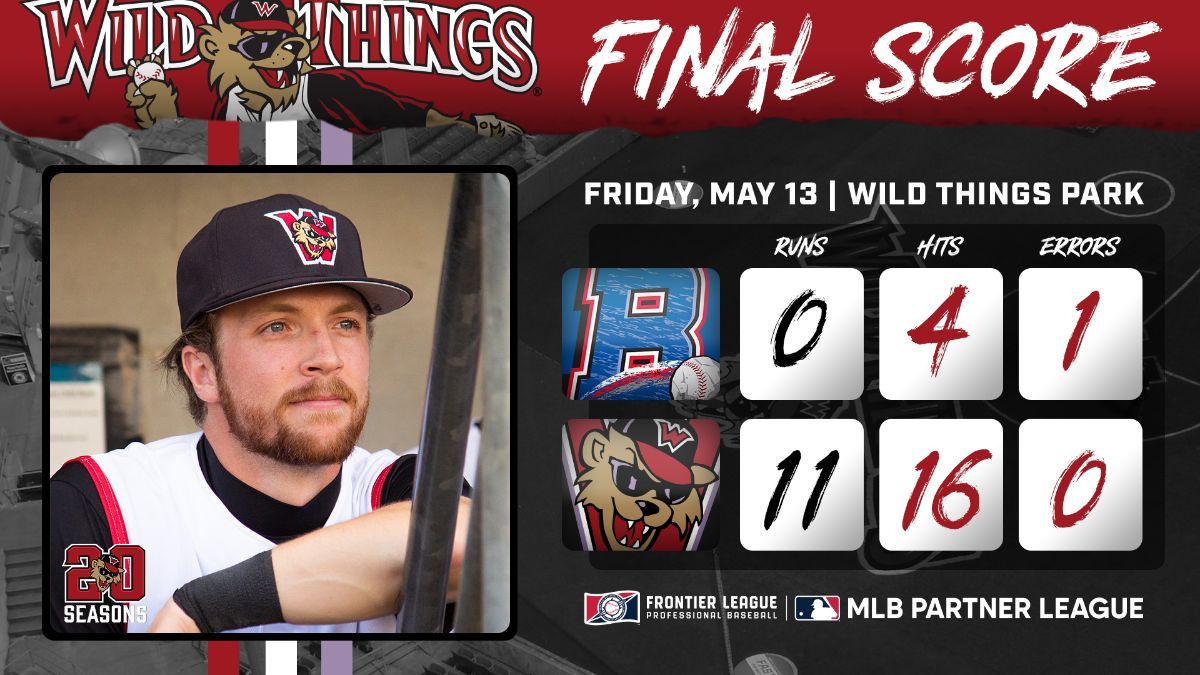 WASHINGTON, Pa. (May 13) - The Wild Things (1-0) launched into their 20th season of Frontier League play by shutting out the New York Boulders (0-2) 11-0 in a steamrolling of an opening day.

Washington rode to victory on the backs of right-hander Rob Whalen, with a dominant five-inning, eight-strikeout performance and a combined 16 Wild Things hits.

On the first pitch of the season, Nick Ward sent the crowd to their feet with an electric opposite-field home run to put the Wild Things up 1-0. The scoring show continued in the second with an Ian Walters’ smash to deep right field bringing in Hector Roa, who had doubled to start the frame. Cole Brannen hit a hard ground ball that squeaked past the Boulders first baseman, bringing around Alex Alvarez to score from first. Brannen would then score on a Nick Ward double. Scotty Dubrule drove in Ward with a double capping off the inning at 6-0 Wild Things.

Nick Ward carried the momentum into the bottom of the third with a single to bring in Roa from second, extending the lead to seven runs. In the next half inning, LG Castillo tripled on a laser down the right field line and scored on an Andrew Czech ground out, pushing the lead to 8-0 Wild Things.

Ward found himself with runners in scoring position again, and after an error on his batted ball, another run came in to make it 9-0. Ward and Ramon Osuna each hit RBI singles to drive in runs during the bottom of the seventh, making it 11-0.

The Wild Things would take this led to the end of the ballgame with help from reliever Hayden Pearce, who set down all nine batters he faced with five strikeouts, as well as a clean ninth from Brailin Gonzalez.

Washington takes on New York again tomorrow, Saturday, May 14, at 7:05 p.m. for game two of their three-game opening homestand. The first 1,000 fans through the gates receive a Wild Thing-themed poster as part of the five-part 20 Seasons Poster Series promotion, presented by Key Bank. Gates open at 6 p.m. and tickets are available at wildthingstickets.com.

ABOUT THE WASHINGTON WILD THINGS

The Washington Wild Things are a professional baseball team that plays in the MLB-partnered Frontier League. In 2022, the Wild Things are celebrating their 20th season of baseball in the longest-running independent baseball league in history with all kinds of celebrations, fun and great baseball at Wild Things Park. The team has won seven division championships and has been to four Frontier League Championship Series within their numerous playoff appearances. Fans and media can stay aware of all the happenings within the Wild Things' organization, both on and off the field, by following the team's social media platforms and website: washingtonwildthings.com. For other inquiries, call the front office at 724-250-9555.

The Wild Things’ organization and Wild Things Park has been selected as the host of the 2022 Frontier League All-Star Game, presented by The Coury Firm. The festivities will begin Saturday, July 16 and run through the game itself Wednesday, July 20. Tickets are available at bit.ly/FLASG22TIX. More information can be found at washingtonwildthings.com as well.