Schaumburg Gets Three HRs, Shuts Out Washington in Game 1 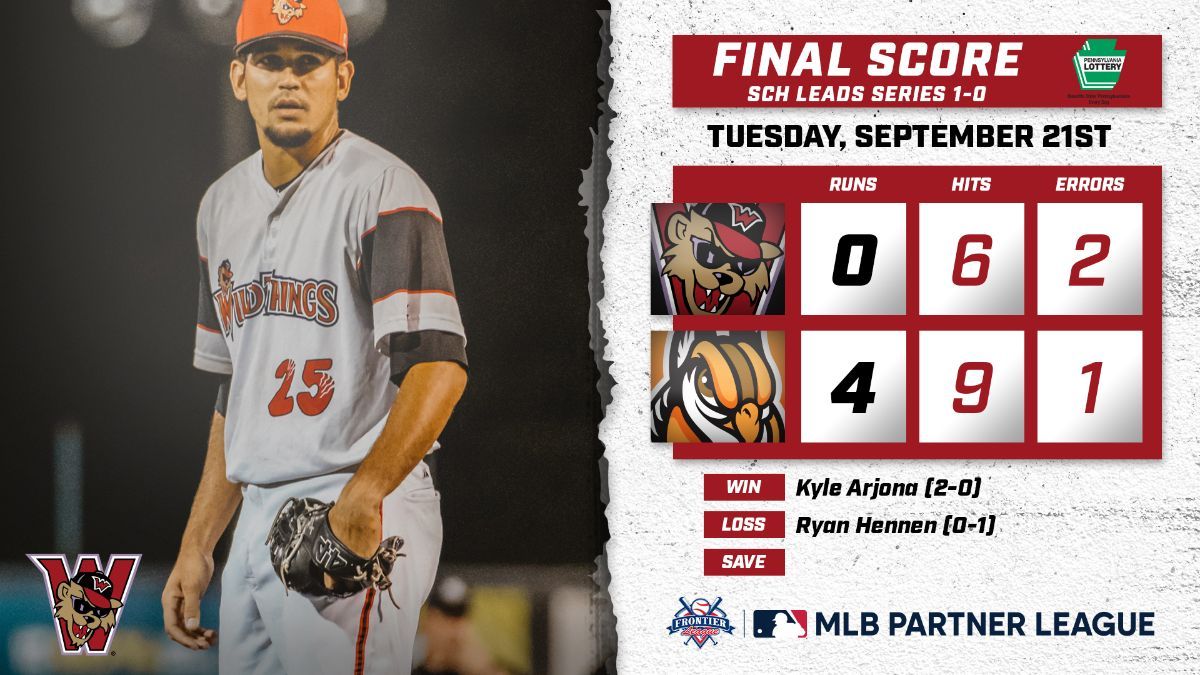 SCHAUMBURG, Il. (September 21) - Kyle Arjona was excellent for Schaumburg and Washington's bats couldn't string things together in game one of the Frontier League Championship Series, while all of Schaumburg's runs in the 4-0 affair came in on long balls to give the Boomers a 1-0 lead in the best of five series.

Each team had a few chances early but neither was able to scratch anything across the plate until Schaumburg got two in the bottom of the fifth. Clint Hardy led off the inning with a homer to right against Washington starter Ryan Hennen before Angelo Gumbs, after fanning on a total of six pitches in his first two trips, lifted a liner down the right field line. Bralin Jackson attempted to make a diving catch, missed and the ball roll to the wall. Gumbs would score on the play, notching an inside-the-park homer.

Ryan Hennen exited after walking the lead-off batter in the seventh. He suffered the loss after going six innings and allowing seven hits and three earned runs with six strikeouts and five walks. Chase Dawson's two-run homer against Kevin McNorton in the seventh after Hennen's exit made it 4-0 Schaumburg, with one of the runs being charged to Hennen.

Kyle Arjona exited after retiring two in the eighth after a lead-off base knock by Hector Roa, which was his second hit of the game and the sixth against the Boomers' starter. Arjona didn't allow a run on those six hits. He didn't walk anyone and fanned eight. Darrell Thompson got Arjona out of the eighth unscathed with the runner at first by retiring Andrew Czech.

Game two is set for tomorrow at 7:30 p.m., Wednesday, September 22 at Wintrust Field in Schaumburg. Daren Osby will take the mound looking to help Washington even the series at a game apiece. He'll be opposed by Geoff Bramblett for the Boomers.

Tickets are available for games three through five of the FLCS at Wild Things Park. Games four and five are if necessary. The games Friday and Saturday are slated for 7:05 p.m. with Sunday's if necessary game five at 5:35 p.m. Get seats for just $5 apiece at wildthingstickets.com.