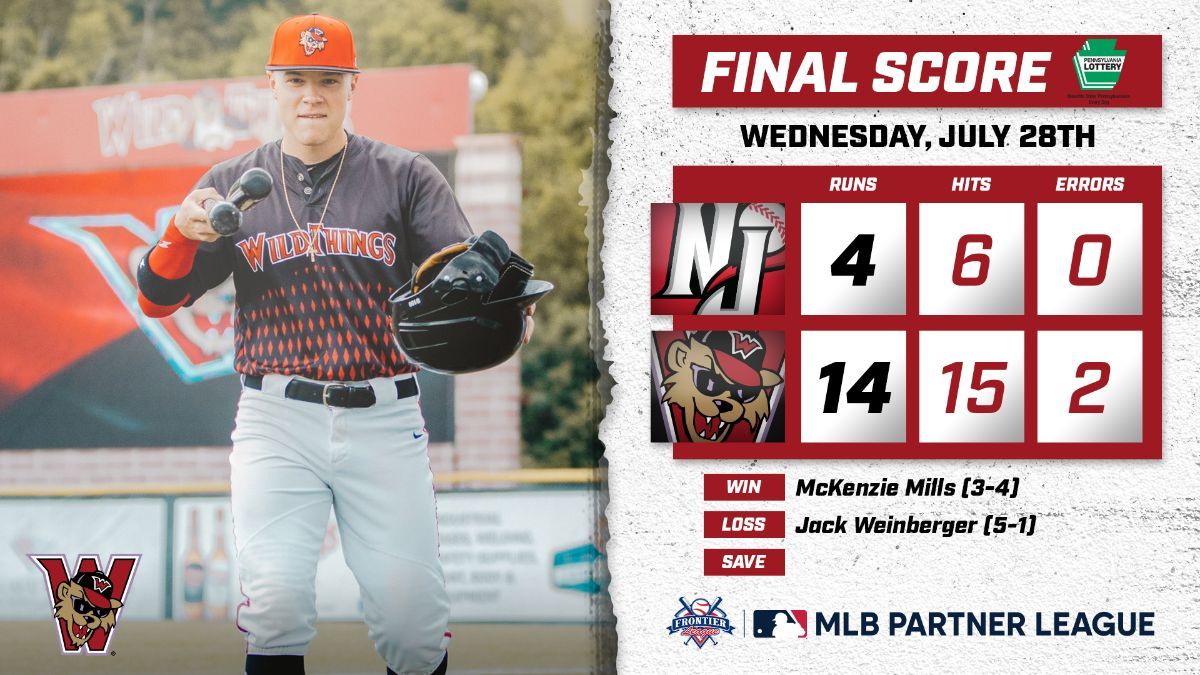 WASHINGTON, Pa. (July 28) - The Washington Wild Things got back to .500 and won their eighth-straight game against the New Jersey Jackals by pounding out 15 hits and another four home runs in a 14-4 victory to take the series at Wild Things Park Wednesday.

New Jersey scored the first three runs of the game in the top of the second with an RBI triple by Josh Rehwaldt, who then scored on an error on the same play. Nicco Toni's second home run of the season made it 3-0 Jackals. In the home half of the inning, Joe Campagna's eight home run and first of the night, a three-run shot to left, tied the game.

The Wild Things scored four runs in both the fourth and fifth innings. In the fourth, a wild pitch brought home Andrew Czech, Andrew Sohn and Scotty Dubrule scored on a two-run single by Bralin Jackson and Jackson scored on a single by Hector Roa. In the fifth, Trevor Casanova's solo shot started the frame before Dubrule's sac fly extended the lead and a two-run double by Jackson extended the Wild Things' lead to 11-3.

Campagna hit his second home run with two outs in the sixth to take hold of second on the team with nine homers. After New Jersey plated a run in the seventh, Cody Young hit a two-run home run in the eighth to give Washington its lead at 14-4 that would hold up as the final.

Jackson had two hits and four RBI. Campagna's two homers were a part of a four-hit night for the rookie. He drove in four and scored three times. Czech, Casanova and Roa added two hits each. McKenzie Mills went to 3-4 with the win while Jack Weinberger suffered his first loss.

Tomorrow, the Wild Things will go for a sweep of the Jackals at 7:05 on a Thirsty Thursday at Wild Things Park, presented by Stoney's. Tickets are available at wildthingstickets.com and at the box office.