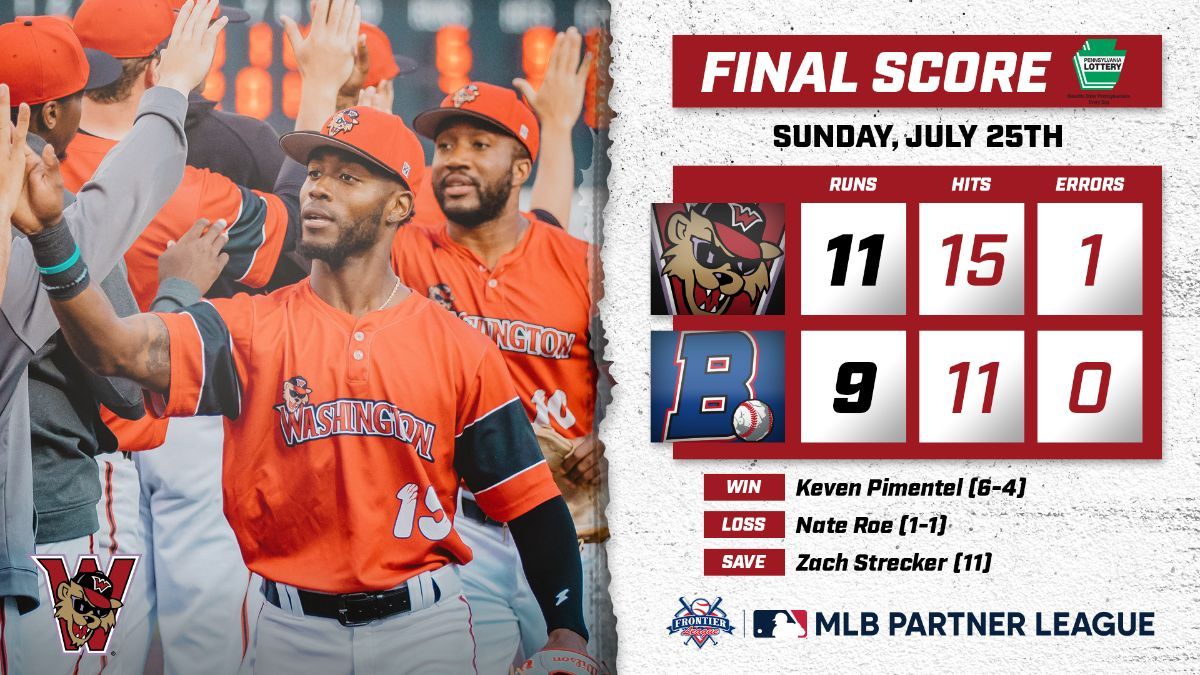 POMONA, NY (July 25) - The Washington Wild Things exploded offensively en route to a big win to earn a series split at Palisades Credit Union Park against the New York Boulders Sunday. Getting the win took holding off a Boulders' comeback effort, but the Wild Things held on 11-9.

The Boulders started the scoring with another big first inning after they plated four in last night's first inning before having to come back to win the ballgame. In Sunday's finale, New York plated three with the help of two walks and two hits in the first. The inning was highlighted by a two-run single from Ryan Ramiz, which was the first of his four hits on the day.

Washington waited until the third to respond but did so in a big way by scoring the next 10 runs in the game. In the third Washington plated four runs to take the lead. A one-out triple by Nick Ward scored Andrew Czech, who had singled. Ward later scored on a base hit by Bralin Jackson, his second of the contest. Scotty Dubrule came across on a double by Grant Heyman before Jackson scored and Heyman was thrown out trying to score on a single through the left side by Hector Roa.

Czech blasted his 12th home run of the season to extend Washington's lead to 5-3 in the fourth inning before the Wild Things grabbed four more in the fifth. Heyman, Roa, Trevor Casanova and Czech knocked in a run in the inning that saw the visitors collect six hits and send 10 to the dish. The Wild Things picked up one more in the top of the sixth on an RBI single by Roa to score Jackson, who was on base for the fourth time.

After Phil Capra hit a three-run home run in the bottom of the sixth and Keven Pimentel was chased from the game, rain came and put the contest into a delay that lasted just shy of an hour. New York didn't get any more in that frame but scored twice against Alex Boshers in the seventh on an RBI double by Gian Martellini and a groundout to score a run off the bat of Capra. That made it 10-8 as the game went to the eighth.

New York got the tying run into scoring position in that eighth but James Meeker escaped it unscathed. Washington added a run in the ninth on a double by Ward to score pinch runner Cam Phelts. Zach Strecker yielded a run in the ninth but closed it out for his 11th save of the year and the 63rd of his Frontier League career.

Washington returns home Tuesday to open a huge six-game homestand at Wild Things Park with the New Jersey Jackals in town to start it at 7:05 p.m. Tuesday.