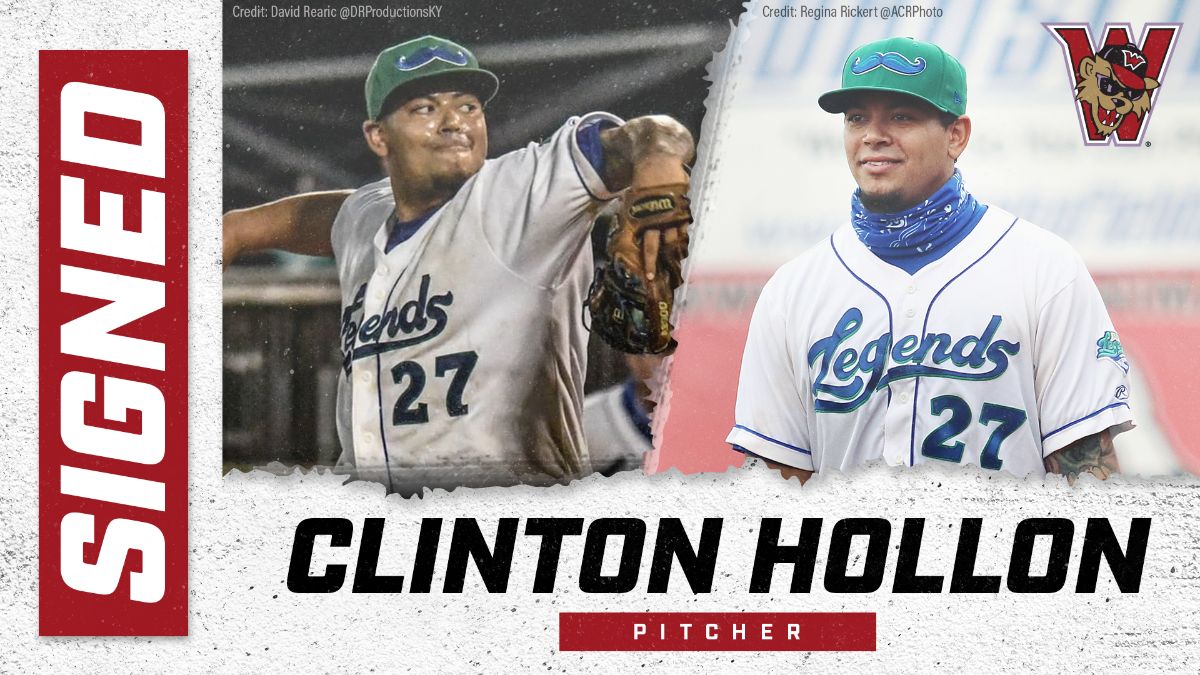 WASHINGTON, Pa. (November 3) – The Washington Wild Things have announced the signing of a fourth pitcher to the 2021 roster, right-handed pitcher Clinton Hollon, a former second-round pick of the Toronto Blue Jays to a deal. Hollon pitched in the Battle of the Bourbon Trail this past summer for the Lexington Legends.

A native of Versailles, Kentucky, Hollon pitched in the Blue Jays’ organization in 2013 and 2015, but adversity on and off, stemming from Tommy John surgery brought his minor-league career to a halt, and he was released in 2017.

Hollon worked his way back and found himself back on the mound this past summer with the Legends. In his first start against pros in five years, Hollon struck out eight batters in five innings of work and allowed six hits.

Now, his journey in baseball continues with his contract with the Wild Things.

“Without question, Clinton has faced his share of challenges since being drafted in 2013. He is extremely talented, and I am confident he now has the driving forces in his life to make him successful,” said president and general manager Tony Buccilli. “On the mound he is the aggressor, fueled by his competitiveness and that bulldog mentality we look for. Clinton is training with something to prove this year and we look forward to seeing him at his best.”

Hollon was teammates in Lexington with Wild Things’ pitcher Spencer Bivens, who played with the Legends after pod play in Washington wrapped up. Hollon said once that connection was made and thus a connection with Buccilli, the desire to play for Washington was immediately there.

“Once Tony reached out to me, and I talked with him the first time, I wanted to play with the Wild Things,” said Hollon. “He is a very genuine person and made me feel wanted, and that’s all a player ever wants, especially one in my position.”

Hollon was the top-ranked right hander and player in Kentucky as a senior in the Class of 2013 at Woodford County High School. He was ranked the 28th overall player nationally and the sixth-best right-handed pitcher in Perfect Game’s rankings.

His fastball sat in the mid 90’s in his high school days, and his Yellow Jackets won a state title his junior year in 2012. They got to the state title game on the back of 11 punchouts by Hollon in a semifinal win over Bishop Brossart. It was the first state championship in the program’s history.

He began his pro career after being selected in the 2nd round of the 2013 MLB Amateur Draft by Toronto and appeared in six games, fanning 15 over 17.1 innings of work. He allowed just six runs that year.

In 2014 during Spring Training, Hollon found himself in need of Tommy John surgery. As he went through rehab following the surgery, he became a father. In 2015, the hard-throwing righty pitched for two teams in A ball (Lansing, A; Vancouver, A-) and struck out 45 in 58.2 innings of work with a 3.38 ERA.

During that season, however, he was suspended 50 games for a positive drug test and again was suspended in 2016. The suspensions were a result of an addiction to prescribed pain medication following the reconstructive surgery. Hollon spent time in treatment but was released by the Blue Jays in 2017, when his battle with addiction worsened.

His son was a huge motivating factor on his road to recovery. Once returning to baseball became a goal, he made his way to Lexington. Getting to play in front of his son this summer was a “blessing,” according to Hollon.

“The Battle of the Bourbon Trail was a ton of fun and I got a chance to prove to myself that I still had what it takes to play this game at a high level,” he said. “Getting to play in front of a lot of family and friends [was awesome] and [I got] an overwhelming amount of love and support from not only them but from people that I hadn’t seen or talked to in years. Plus, my son got to see me pitch for the first time.”

On the field, Hollon says he is an extremely competitive pitcher and a passionate player.

“When I am on the mound, I compete with everything I have,” said Hollon. “Fans can expect me to attack hitters and compete to give the team a chance to win the baseball game.”

He said his goal all the time from a team standpoint is to win a championship, but the chance to get back out there and enjoy the game again also a priority to him.

“Having a healthy season is most important and God-willing that be true I have no doubt it will be full of success,” said Hollon.

WKYT in Lexington, Kentucky did a story on Hollon while he was pitching in Lexington this past summer that you can view here: Woodford County’s Clinton Hollon pitching his way past addiction