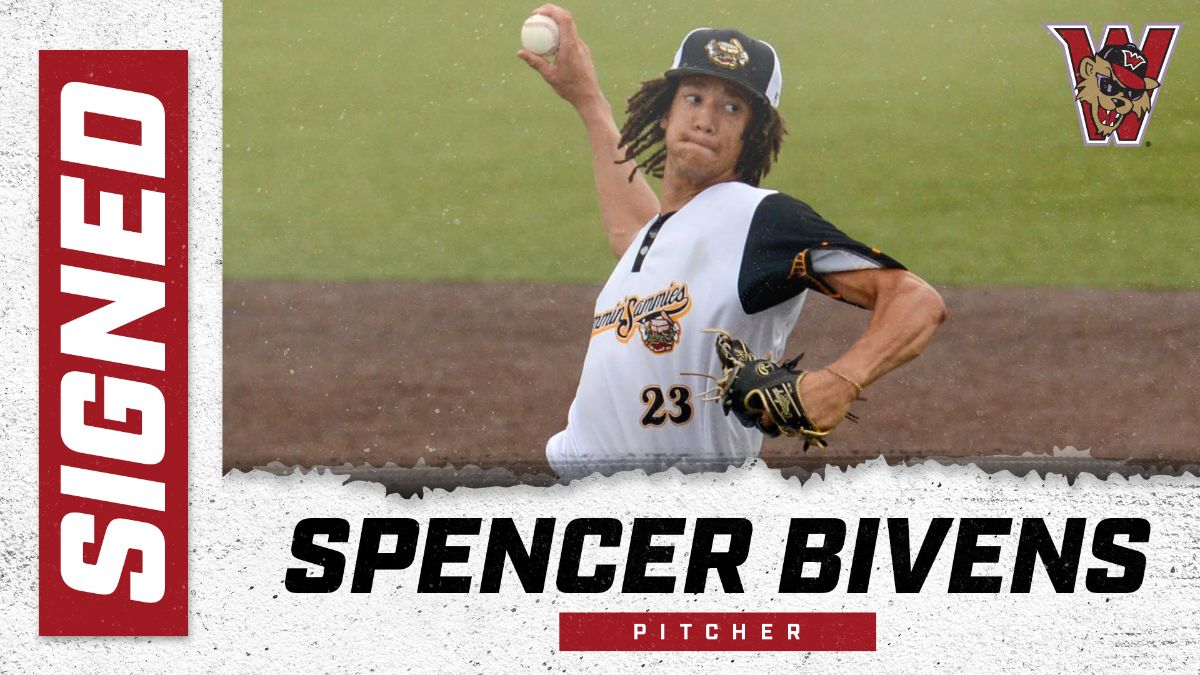 WASHINGTON, Pa. (October 13) – The Wild Things have added another pitcher to the 2021 roster, as today the team announced the acquisition of State College, Pennsylvania native Spencer Bivens. Bivens becomes the second pitcher announced to next year’s roster. The right hander pitched for the Steel City Slammin’ Sammies during pod play at Wild Things Park this past summer.
In six games, three of which were starts for the Slammin’ Sammies, Bivens logged a 3.74 ERA and was 3-2 across 21.2 innings of work. In that work, he allowed 17 hits and nine runs, all earned, with 19 strikeouts to eight walks and one hit batter. Hitters managed just a .230 batting average against the righty.
“Spencer and I have had multiple discussions about how to best showcase his versatility. This past year he showed the ability to give efficient length when needed, as well as being a matchup problem with put-away stuff,” said president and general manager Tony Buccilli. “He has shown the makeup to be a quality contributor, bringing an experienced mound presence as a rookie and we believe his development will continue with the bullpen assets we have in place.”
Bivens said the 2020 pod season gave him a taste of how his pitching translated to the pro level, and the immediate respect he received from the Wild Things’ organization was a big reason he decided to sign with the team going forward.
“I felt with them I was getting exactly what I wanted: some respect,” said Bivens. “Tony would hit me up almost every week and I felt wanted with the organization.”
Bivens played his high school ball at State College Area High School before he headed off to Louisburg College, where he pitched in two seasons for the Hurricanes. As a sophomore, Bivens was 4-0 with a 3.14 ERA and 27 strikeouts for the junior college. He’d then transfer to Penn State University and worked out with the team, but did not make the final spring roster. That’s when he found himself at Rogers State University, a Division II school.
In 2017, Bivens led the Hillcats with eight wins as he started 13 of his 14 games on the mound, He amassed 73.1 innings and punched out 46 batters while holding hitters to a .256 batting average. He started that year 4-0 and then 7-1 and had four shutout performances. As a senior in 2018, Bivens was named Second Team All-Heartland Conference and First Team All-OklahomaSports.Net after making 13 starts and posting a 7-5 record in 83.2 innings. He logged six complete games and two shutouts as he sported a 2.37 ERA with 48 strikeouts.
Bivens began his professional career in France in 2019 and was 9-3 with a 2.51 earned run average over 17 appearances (seven starts). He had four saves in the midst of 75.1 innings pitched and allowed 60 hits, walked 19 and fanned 81 hitters.
He was set to play in the Czech Republic before the pandemic halted those plans and he found himself in Washington, where he said he fell in love with the “yinzer mentality.”
“I’m not a Pittsburgh guy but I do love Pittsburgh. [I’m a] die-hard Steelers fan and seeing that [yinzer mentality] in people/teammates fires me up,” said Bivens. “I love the get your hands dirty and get to work mentality we had with the Slammin’ Sammies this year so I’m hoping we can keep that going in 2021.”
In terms of what fans can expect from him, Bivens said he’s kind of quiet on the field.
“I know what I’m there to do and I go about it like it’s expected. I don’t get overly hype because I’m simply getting my job done,” said Bivens. “But in a tight situation you can expect some attitude out of me. I’m all about team success and I love seeing my guys making plays for me while I’m on the mound or when I’m on the bench.”
He, like others before him, seem to have the Chase Big Things idea down that the Wild Things have adopted for 2021.
“Championship or bust for the Things in 2021,” he said. “We have high expectations for ourselves. I just want to do the best I can on the field and leave nothing behind for someone to question.”
Bivens joins Max Tannenbaum as pitchers officially to sign with the club for 2021 with more to be announced in the coming weeks. Overall, he’s the sixth player announced for the roster.
PROUD SPONSORS OF THE WILD THINGS