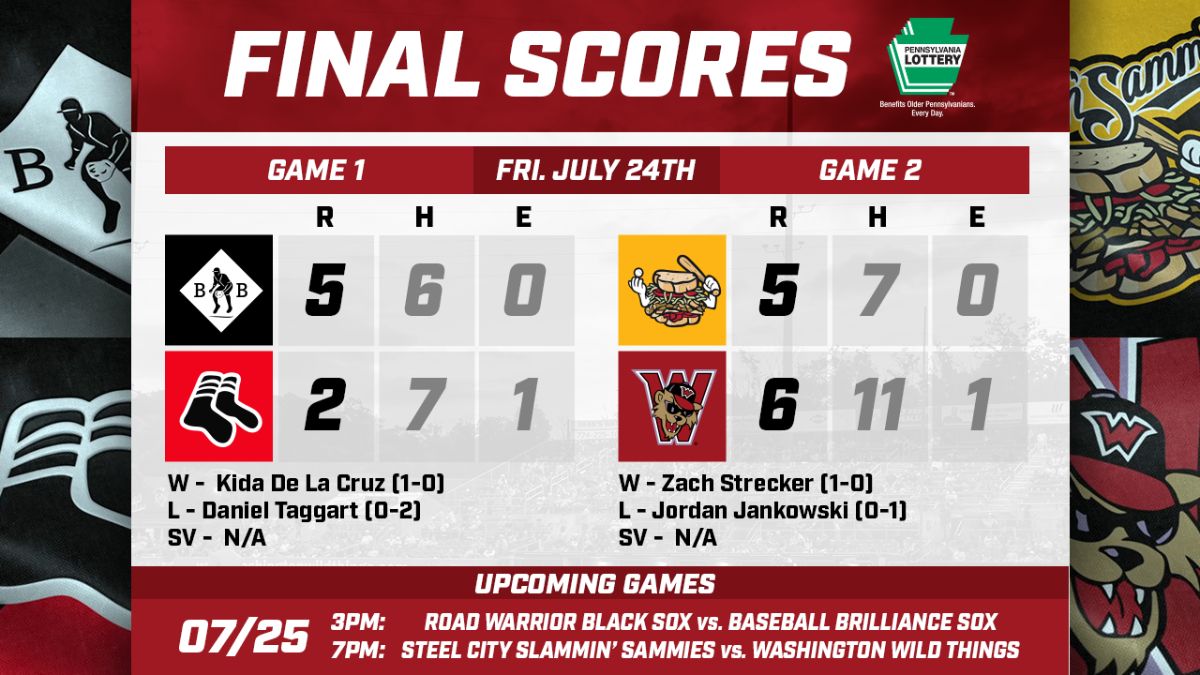 WASHINGTON, Pa. (July 24) - Baseball Brilliance broke open the first game and ran away with it a bit over the Road Warriors to win its third in a row, before the Wild Things walked things off for the second night in a row and moved into sole possession of firstplace, besting the Slammin' Sammies.

Road Warriors' catcher Danny Molinari got the scoring started in game one with an RBI double off the centerfield wall. In the top of the third, three-time MLB All Star Brandon Phillips tied the game at one apiece with a single to right center field. Phillips finished the day 1-for-5 and picked up his third RBI of the summer with the hit.

The tie didn't last long, as the Road Warriors took the lead back temporarily in the third on a groundout by Zane Gelphman that plated Brett Smith, who had tripled to start the inning. That's when Baseball Brilliance took over.

A Danny Muller sac fly and a run-scoring groundout by Nate Thompson gave the Sox a 3-2 lead. They then scored six in the fifth. Mark Demko singled home a run before Cody Lovejoy hit a three-run homer to make it 7-2. Muller and Thompson both knocked in another after that. Trey Bigford singled home a run and a double play brought one in as well in the sixth for the Road Warriors.

Brennan Price hit a home run on the 14th pitch of his at bat in the eighth before Mark Demko and Cody Lovejoy brought home runs to make it 12-4. Carson McCurdy and Molinari singled home runs in the eighth, which was the final inning due to time constraints before game two.

Hector Roa singled home Chris Kwitzer in the first inning of that contest to open the scoring in the nightcap. In the second, Nick Ward hit a two-run homer for the Slammin' Sammies in the second, which gave Steel City a 2-1 lead. In the third, Stewart Ijames doubled down the line to right to tie the game before Roa broke the tie with another RBI single that made it 3-2 Wild Things.

In the seventh, John Sansone and Dalton Combs singled in runs in the top half to give Steel City the lead back before a Roa single tied the game in the seventh. Russ Olive's second home run of the summer broke the 4-4 tie in the eighth before the Wild Things tied the game on a wild pitch that scored Stewart Ijames. Then, with the bases loaded, Terrence Pinkston walked to literally walk the game off. It's the second straight game the Wild Things have won by walkoff, and they now have first place alone at 7-3 through 10 games.

Tomorrow, the matchups are the same for Wrestling Night at Wild Things Park. Tickets are available for both games by calling the box office at 724-250-9555 or by heading to washingtonwildthings.com.

View box scores for the games below and cumulative stats on the stats tab of the website's home page.