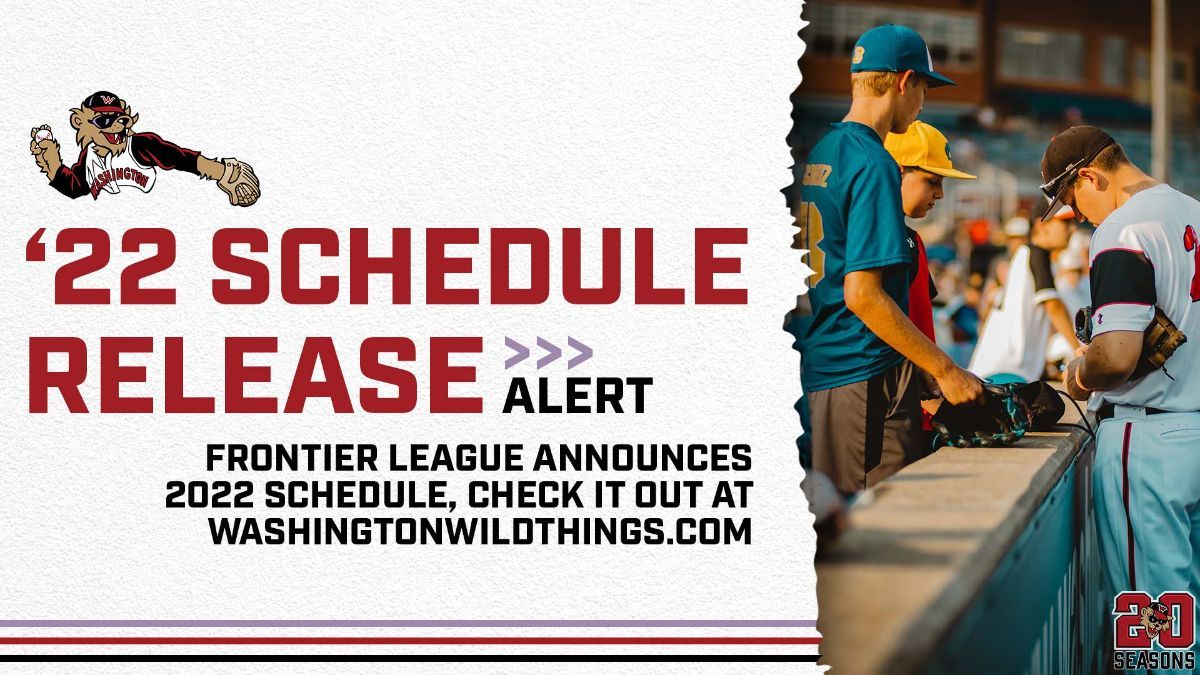 WASHINGTON, Pa. (Nov. 29) - The Frontier League announced its 2022 schedule today, thus the Washington Wild Things have announced their schedule for the upcoming 20th season of Wild Things' baseball in league play. Opening Day for the league will feature two games Thursday, May 12, while the Wild Things will open the season at home, Friday, May 13 through Sunday, May 15 against the New York Boulders. It'll be the first time since 2015 the Wild Things start the campaign at home.

The league's teams are scheduled to play 96 games this season once again and the league will be broken up into two divisions, which will each send three teams to the postseason. New York will host the Sussex County Miners while the Florence Y'alls will host the Tri-City ValleyCats May 12 to open the league's campaign.

The West Division will look like the pre-Can Am merger Frontier League and will be comprised of the Wild Things, the Lake Erie Crushers, the Florence Y'alls, the Evansville Otters, the Windy City ThunderBolts, the Joliet Slammers, the Schaumburg Boomers and the Gateway Grizzlies.

The East Division will include the Québec Capitales, the Trois-Rivières Aigles, the Ottawa Titans, the Sussex County Miners, the New Jersey Jackals, the New York Boulders, the Tri-City ValleyCats and a travel team, the Frontier Greys, which return to the league.

The Greys are based on the former Zanesville Greys, who won the first Frontier League championship.  The team name is a tribute to the author Zane Grey who wrote a number of Western and baseball stories in the early 1900s.  The Redheaded Outfield is one of his better known novels.

Come postseason time, the third-place teams in each division will battle the second-place teams in a one-game wild card format, which hasn't been in the league since 2015. The winners of the wild card games will play their division's champion in the Frontier League Division Series which will be a best of three format this season. Winners in the FLDS action will compete for the league's championship in a best of five Frontier League Championship Series.

As mentioned, the Wild Things will open at home Friday, May 13 through Sunday, May 15 against the Boulders. They'll then travel to Sussex County for a three-game weekday series before returning home for a nine-game homestand that begins Friday, May 20 against the Frontier Greys. Washington will host Tri-City and New Jersey in that stretch as well.

Other highlights of the schedule include Washington's rematches with the Schaumburg Boomers, who defeated the Wild Things in the 2021 Frontier League Championship Series. Washington hosts Schaumburg June 10-12 before traveling to Schaumburg for three games from June 17-19. The two then meet again in Schaumburg August 23-25. The home slate includes the first-ever visits to Wild Things Park for the Québec Capitales, July 29 through July 31. Fans will have a chance to see the Windy City ThunderBolts, Joliet Slammers, Gateway Grizzlies and Evansville Otters in Washington for the first time since 2019.

Washington will spend a week in Canada immediately following the league's All Star break, which runs Monday, July 18 through Thursday, July 21. The Wild Things play at Trois-Rivières July 22-24 and then visit the Ottawa Titans July 26-28.

The home and regular season schedule concludes for the Things with a six-game homestand August 30 through September 4 with series against Evansville and Windy City.

The Wild Things will host games in each month of the season by the following breakdown: 12 in May, 12 in June, nine in July, 14 in August and all four in September as the regular season closes. In total, Washington will play 51 home games and 45 on the road.

The full Wild Things' schedule is available by going to the schedule tab and clicking printable schedule or by clicking here.