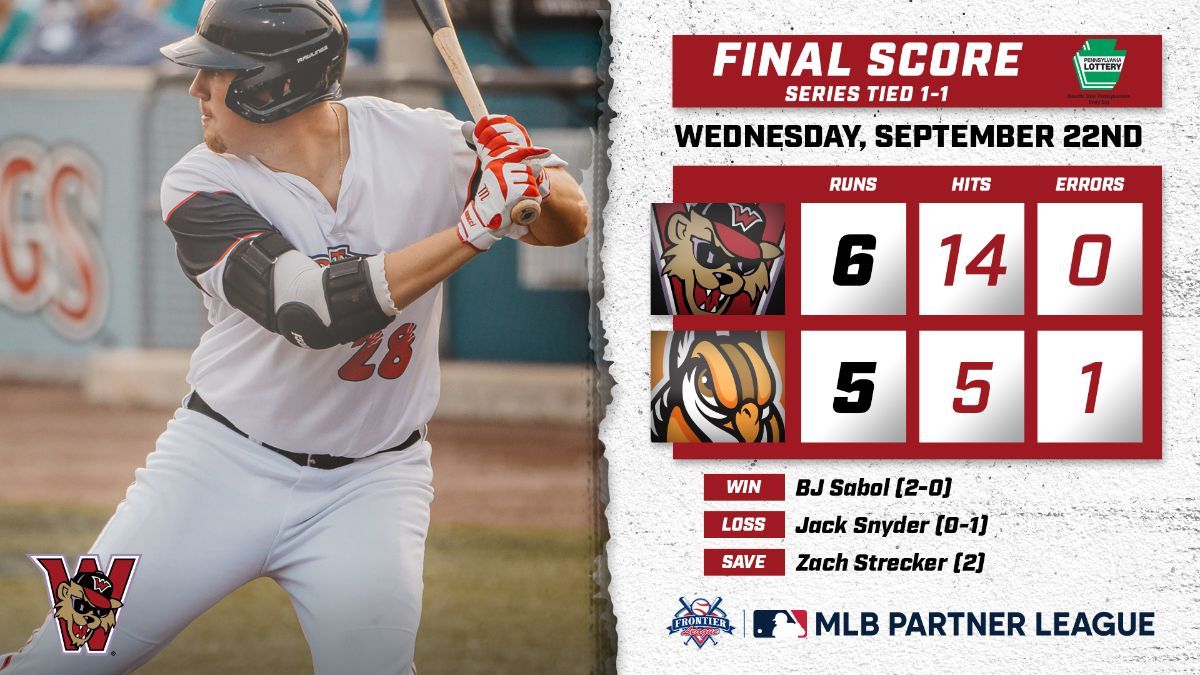 SCHAUMBURG, Il. (Sept. 22) - Andrew Czech's go-ahead, two-run homer in the ninth inning of Game 2 of the Frontier League Championship Series Wednesday at Wintrust Field gave the Wild Things a 6-5 lead they wouldn't let up to even the series as it shifts to Washington for Game 3 Friday.

The Wild Things had entered the frame down 5-4 and had stranded the tying run on base in four of the previous five innings after Schaumburg took a 5-4 lead in the bottom of the third inning.

Washington started the scoring with Scotty Dubrule's first postseason home run, a solo shot to lead off the ballgame. The Wild Things ended up adding two more in the first on RBI singles by Hector Roa and Trevor Casanova. Braxton Davidson's three-run homer in the bottom half of the inning tied the game to answer for the Boomers. Schaumburg took the lead when Clint Hardy was hit by a pitch in the bottom of the second with the bases full, but Washington quickly scored on Casanova's second run-scoring single in the third but the tie evaporated quickly.

Dylan Beasley, who relieved Daren Osby, who yielded four runs over two innings in his start, loaded the bases and hit a batter, Alec Craig, to give the Boomers a 5-4 lead in the bottom of the third. Beasley settled in though and got two zeroes to follow. While Washington struggled with runners on base as the game went on, BJ Sabol went three scoreless with six punchouts and allowed just one hit. That set up the stage for Czech's homer in the ninth that scored Hector Roa, who had singled to start the frame.

Zach Strecker finished the game with a one-two-three ninth inning for his second postseason save.

Game three of the series is Friday at 7:05 p.m. in Washington at Wild Things Park and features right hander Ryan Middendorf for the Boomers against Washington's Alex Boshers. Tickets are available for $5 apiece at wildthingstickets.com.