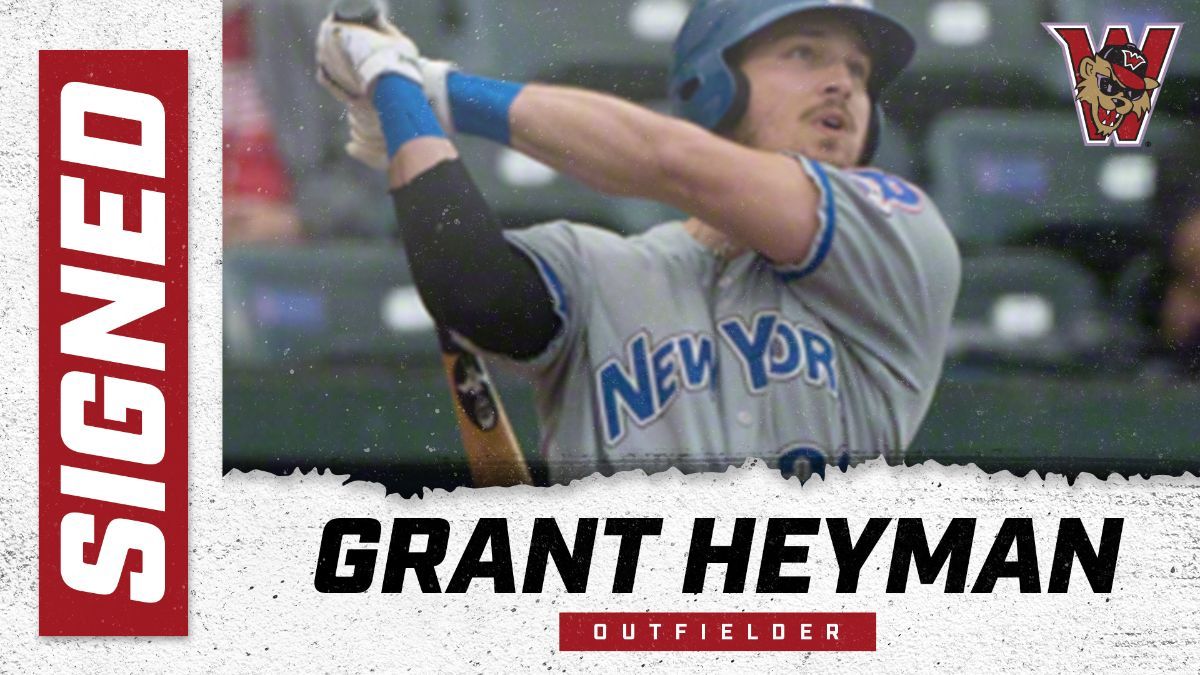 WASHINGTON, Pa. (April 27) - The Wild Things have announced a series of transactions that includes the addition of outfielder Grant Heyman, a trade and a payer being placed on the inactive list today. Washington signed Heyman, traded Joe DeLuca to the Southern Maryland Blue Crabs (Atlantic League) for a player to be named and placed Randy Cesar on the inactive list.

Heyman most recently played for the then Rockland Boulders in 2019, the final season of the Can-Am League. Heyman won the Frontier League-Can-Am Home Run Derby by defeating Wild Things' outfielder Hector Roa in the finals, 11-10. On the year, the left-handed hitter belted 12 home runs and drove in 44 runs. The home run total was tied for sixth in the league.

"Heard nothing but good things about Grant since his Diamondbacks days. He and Tom built a strong rapport during his time in Winnipeg, so we look for that relationship to restore elite production," said president and general manager Tony Buccilli. "A piece like Grant provides great balance to our lineup, adding another former All-Star to our squad and an experienced weapon."

Vaeth is excited to reunite with Heyman on the field.

"I signed Grant when I was in Winnipeg back in 2018 and he had a monster year for us," said Vaeth. "He's a big, strong, athletic kid who will bring a power presence to the middle of our lineup. A big left-handed bat that can leave the yard in any direction. He should fit nicely with Bralin and Hector."

Heyman was drafted out of Sutherland High School in the 11th round of the 2012 draft by the Blue Jays. He did not sign, went to Miami and then the College of Southern Nevada before being drafted in the 8th round by the Diamondbacks in 2014. That occurred after Heyman was Scenic West Athletic Conference Player of the Year at Southern Nevada. He'd go on to play parts of four seasons in the D'Backs farm system and enjoyed his best seasons in 2016 and 2017.

The multi-time pro All Star now joins the Wild Things.

"I had the pleasure of playing for Tom Vaeth and alongside Alex Boshers in Winnipeg and couldn't pass up on an opportunity to play for them," said Heyman. "I have heard great things about the Wild Things organization and am excited to be a part of it."

Heyman has been finishing his college degree and playing college football at Hobart College since the 2019 season while staying ready for baseball season.

"I want to be a reliable player who puts together consistent AB's and performs with runners in scoring position. Most importantly, I want to be a good teammate and provide a veteran presence for the younger players," said Heyman. "I am a bigger lefty that tends to hit for power. I love to have fun and I take pride in playing hard."

The Wild Things also announced that infielder Randy Cesar has been placed on the inactive list as well as a trade sending Joe DeLuca, whom the Things acquired last week as part of the return for Steve Brown, to the Southern Maryland Blue Crabs of the Atlantic League for a player to be named.

Washington opens the 2021 season with a two-game series May 27-28 at Florence. Individual tickets go on sale May 3 for the home schedule.