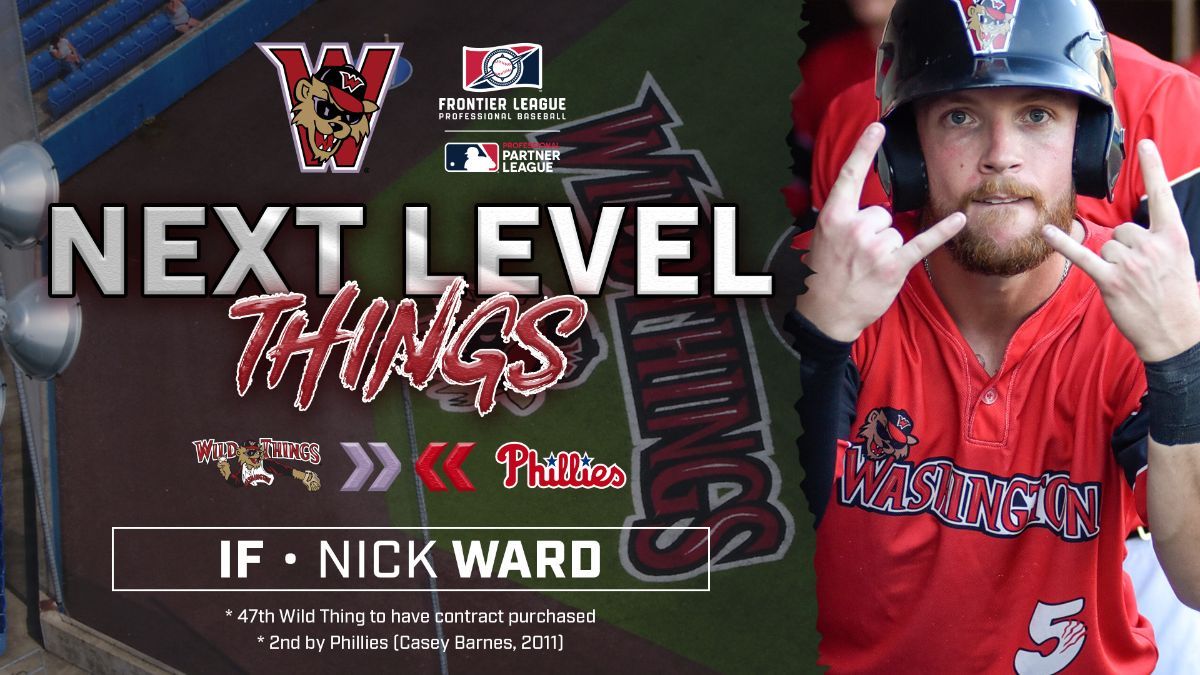 WASHINGTON, Pa. (Dec. 16) – The Washington Wild Things are excited to announce that infielder Nick Ward’s contract has been purchased by the Philadelphia Phillies organization. Ward, a perennial MVP candidate in the Frontier League and three-year member of the Wild Things’ family, becomes the 47th player in club history to have his contract picked up by an affiliated organization.

His .349 batting average was tied for third in the Frontier League, his OBP was the league’s best, his slugging percentage was fifth and he walked the fifth most times in the league. All his production led to him being a prime MVP candidate before Tri-City’s Brantley Bell won the honor. Ward was honored as the Frontier League’s Postseason All-Star shortstop and was one of a franchise-record nine midseason All Stars for the club in 2022.

“[It’s] a bittersweet day for the Wild Things organization. Obviously we are beyond thrilled for Nick to have this opportunity, especially with his hometown team but it’s always tough to lose a player of Nick’s caliber,” said manager Tom Vaeth. “He has done just about everything you can do in his two years here with us… He’s been a leader both on and off the field, endeared himself to the fan base, and was a perennial MVP candidate.”

Vaeth continued by saying: “This signing is not only a great thing for the organization but really also for the league. When a guy like Nick, with all he’s done, gets an opportunity, it just gives credit and hope to all the players that chase their dreams in Indy ball. He will forever be a special part of the Wild Things’ family and we wish him all the best with Philadelphia.”

In two Frontier League seasons, the Wild Things are 76-34 with Ward in the leadoff spot of the lineup in the regular season. He slashed .269/.420/.409 with 18 doubles, five homers and 37 RBI in 2021, a season in which he missed the first few weeks with an injury. He also won the Fran Riordan Award (Citizenship Award) in the league that season. He played for Riordan in the Athletics organization.

Ward was with the Wild Things’ organization as part of the Steel City Slammin’ Sammies during the 2020 pandemic pod. In pod play, Ward showed the flashes that would shine during his time in the Frontier League the last two seasons. He hit a pod-best .373 with a .482 OBP and a .657 slugging percentage. He had 10 extra-base hits in 67 at bats and drove in 12.

He spent 2018-2019 with the Oakland organization once he was selected in the 34th round of the 2018 MLB Amateur Draft out of West Chester University. Ward drove in 67 and walked 81 times in 148 games in the A’s organization. He reached as high as Triple-A, where he played in two games in 2018. His 2019 season was spent between A-ball Beloit and Low-A Vermont.

“All I can say is thank you! I am so grateful for everyone in the Wild Things organization for everything they’ve done,” said Ward. “From Stu and Francine Williams, Tony Buccilli, Kyle Dawson, Tom Vaeth, Alex Boshers, all my teammates and all the fans: I am so grateful for everyone of you. Washington will always be a little special to me. It feels really good for sure, especially it being from my hometown team.”