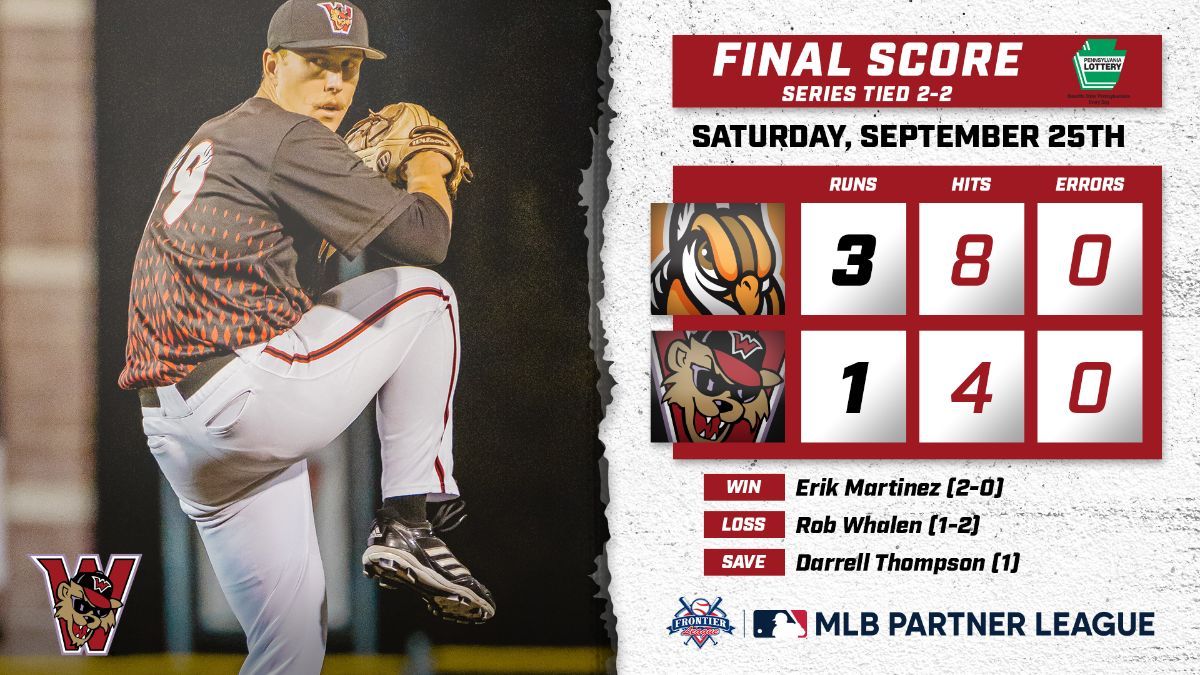 WASHINGTON, Pa. (September 25) - Schaumburg's three runs in the middle stages of game four proved enough as Washington managed just four hits in a clinching scenario in game four of the FLCS at Wild Things Park. Schaumburg won 3-1 to force a game five for all the marbles Sunday at 5:35 p.m.

Schaumburg started the scoring in the third inning when league MVP Quincy Nieporte lined a single to right center and plated two Boomers: Nick Oddo and Chase Dawson. The Boomers added a run on an Angelo Gumbs single in the fourth inning of the ballgame on a slash. It plated Clint Hardy, who had been hit by a pitch to start the inning.

Rob Whalen ended up going seven innings in his start for the Wild Things and yielded seven hits with nine strikeouts to go along with the three earned runs in a quality start.

All the meanwhile, Erik Martinez was dealing for the Boomers with their backs against the walls in the Championship Series. He worked seven and change as he had allowed just four hits through seven strong innings, but after going back out for the eighth, he walked the first two he faced in that frame and exited in favor of Jack Snyder. Snyder walked Andrew Sohn to load the bases with nobody out. Nick Ward lifted a sac fly to make it 3-1 in the eighth. After getting Tristan Peterson, who had entered for an injured Bralin Jackson in the sixth, to punch out, Snyder left the game. Darrell Thompson was the next out to throw for the Boomers. He faced Grant Heyman with runners on the corners and two outs and fanned him to keep it at 3-1.

Martinez' final line read seven innings, four hits, one earned run, eight strikeouts and four walks. Jack Snyder recorded two outs with a walk and a strikeout and was not scored on. BJ Sabol tossed two scoreless innings for Washington for his 20th-straight scoreless outing going back to the regular season. He ended the season with 13.1 scoreless innings in a row and has started the playoffs with 11.1 scoreless innings.

Thompson went back out and worked a 1-2-3 ninth to get a save and help the Boomers to a 3-1 victory to force game five.

With Schaumburg's win, game five of the best of five has been forced. The winner-take-all contest is slated for Sunday at 5:35 p.m. at Wild Things Park. Tickets are available to see the Frontier League champion crowned tomorrow night in Washington. Go to wildthingstickets.com or call 724-250-9555 for tickets and information.