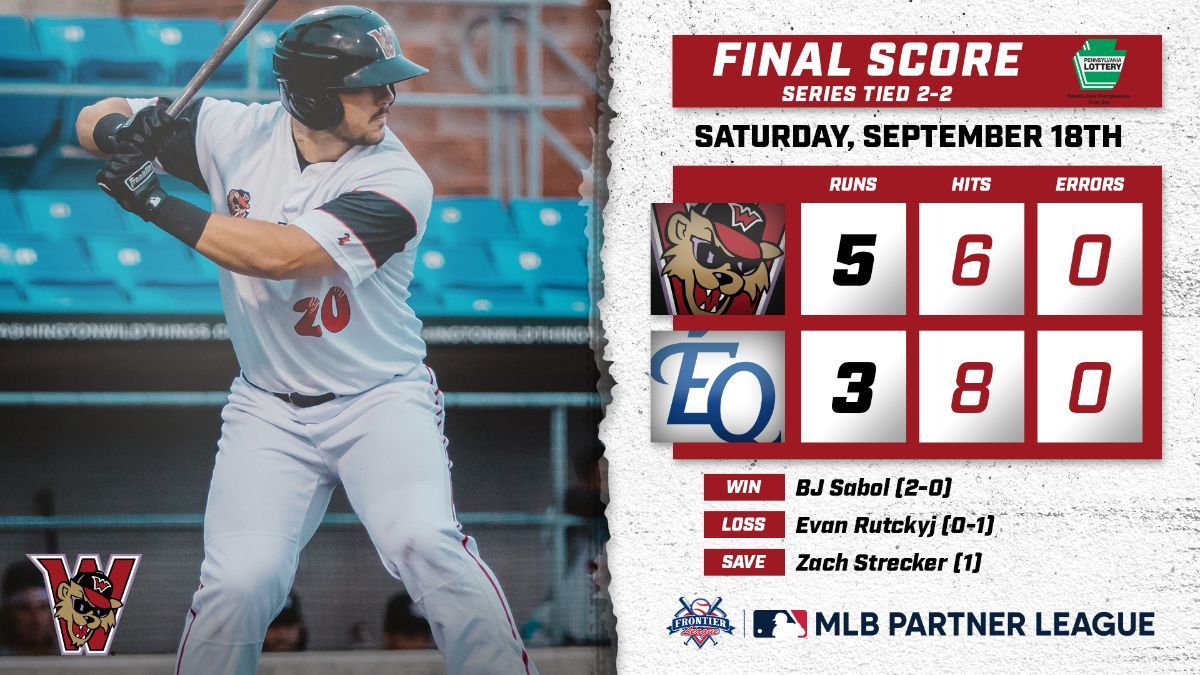 TROIS-RIVIERES, Quebec, Canada (September 18) - A two-run double by Tristan Peterson in the ninth inning of game four Saturday proved to be the difference as Washington forced a decisive game five in the FLDS against Équipe Québec with a win, 5-3.

Équipe Québec struck first after loading the bases with nobody out in the third inning. Washington didn't have a hit and only got two baserunners in its first three trips before the home team got on the board. A fielder's choice scored a run after runners were at second and third after a Jesse Hodges double. Ruben Castro picked up his first RBI of the series with it as Andrew Czech's throw home was late trying to get Jonathan Lacroix. But that's all Équipe Québec would get in the frame, leaving the bags full.

Washington got into the hit column and responded eventually in the fifth inning. After Andrew Czech worked an 0-2 count to a walk to lead the frame off, Tristan Peterson grounded a ball toward the mound for the first Wild Things' hit of the night as Henry Omana couldn't make the play. Joe Campagna bunted the two runners forward and Nick Ward softly lined a two-strike pitch to short left to plate Czech and Peterson and give Washington a 2-1 lead.

The lead got extended on a 3-2 single with two outs in the sixth by Czech to plate Bralin Jackson. Équipe Québec got a run back in the bottom of the sixth on a laced RBI double by Gift Ngoepe and then tied it when Ngoepe scored on a soft liner over Andrew Sohn's head into left center by Connor Panas.

Washington took the lead breaking the tie in the ninth on Peterson's ground ball up the third base line and past the infield to score Hector Roa and Andrew Czech. With the game at 5-3, BJ Sabol went back out with two scoreless innings under his belt. Sabol walked Ngoepe before getting a flyout and after a right-handed pinch hitter was announced, Tom Vaeth countered with Zach Strecker, who yielded a fisted single to Dustyn Macaluso before getting two fielder's choice grounders to seal the victory.

With the win, Washington has forced a winner-take-all game five of the FLDS tomorrow in Québec City, Québec, Canada at 6:05 p.m. ET. The game will be played at 6:05 p.m. Équipe Québec's starting pitcher has not been announced. Washington will turn back to right-hander Rob Whalen in the decisive contest. The winner heads to the FLCS, which begins Tuesday.