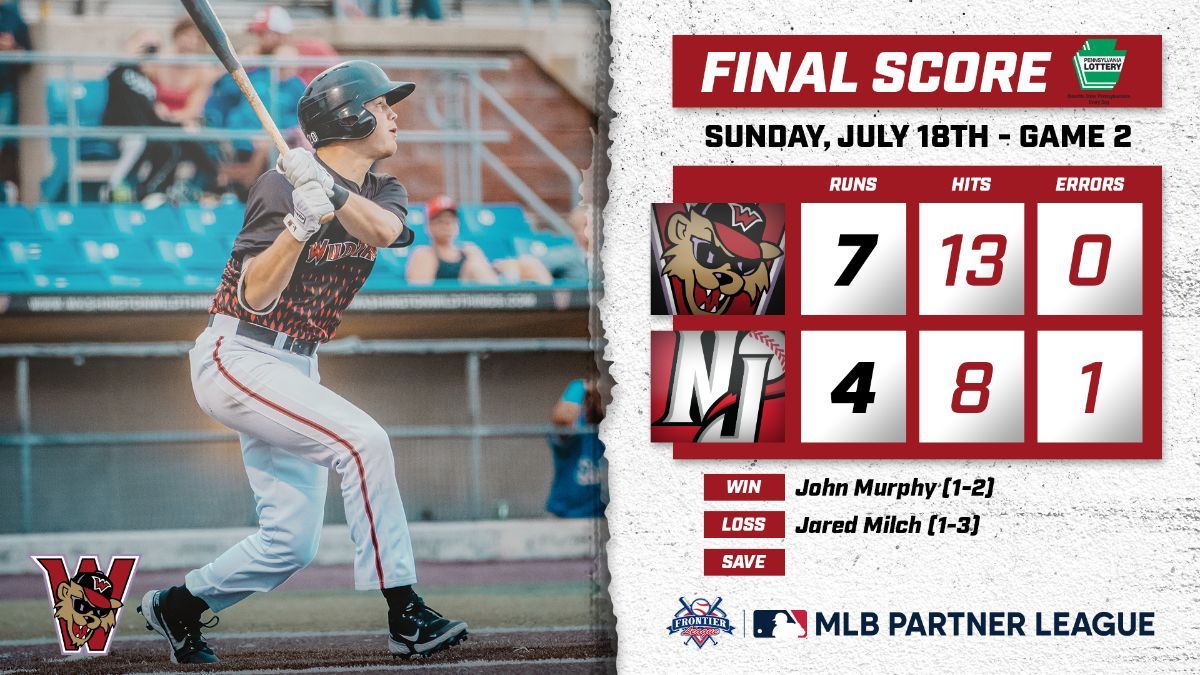 LITTLE FALLS, NJ (July 18) - Washington finished off a sweep with a 7-4 victory in Sunday's originally-scheduled contest at Yogi Berra Stadium, thus winning its sixth-straight game against the Jackals and third in a row overall to round out the road trip.

The game was a Johnny Whole Staff game for the Wild Things as each of the seven Washington pitchers that threw worked one inning. It started with Ben Vicini, who punched out two and allowed a hit in the first but put up a zero. John Murphy then worked a scoreless, one-two-three second with a strikeout before Washington struck to open up the scoring in the third.

A double by Brian Sharp pushed Cody Young, who had singled to lead the inning off, to third. Nick Ward lifted a sac fly to left to score Young and open the scoring. Sharp scored on Trevor Casanova's second hit of the ball game, an RBI single later in the inning. Washington added two in the fourth after Jesus Balaguer tossed a zero on the board. Cody Young picked up his first Washington RBI before Ward lifted another sac fly.

New Jersey got on the board against BJ Sabol, who fanned two in his inning, when Jason Agresti hit his fifth home run of the season. Washington got the run right back in the top of the fifth when Bralin Jackson doubled home Casanova, who had singled for his third hit of the game. The Jackals would respond to that and get back within two in the bottom of the fifth, one on a bases-loaded groundout by Dalton Combs and the other on an infield single by Demetrius Moorer.

The Wild Things came back immediately with a response to that by getting their first five batters on base in the sixth, but the first three netted the Wild Things two runs. Andrew Czech became the first Wild Thing to double digit home runs with a blast to right for his 10th of the year. Cody Young picked up his third hit by doubling before Brian Sharp hit a hard ground ball that popped up into right off the first-base bag for a double to plate Young.

James Meeker ran his scoreless innings streak to 24.1 innings in the sixth despite a leadoff double. New Jersey got a run on two hits and a double play in the seventh against Zach Strecker to bring the game to its final of 7-4.

Washington returns home for a three-game homestand and series with Équipe Québec starting Tuesday at 7:05 p.m. at Wild Things Park. The Wild Things have a Frontier League season long eight-game home win streak going and they'll look to make it four in a row overall Tuesday night. Get tickets at wildthingstickets.com.