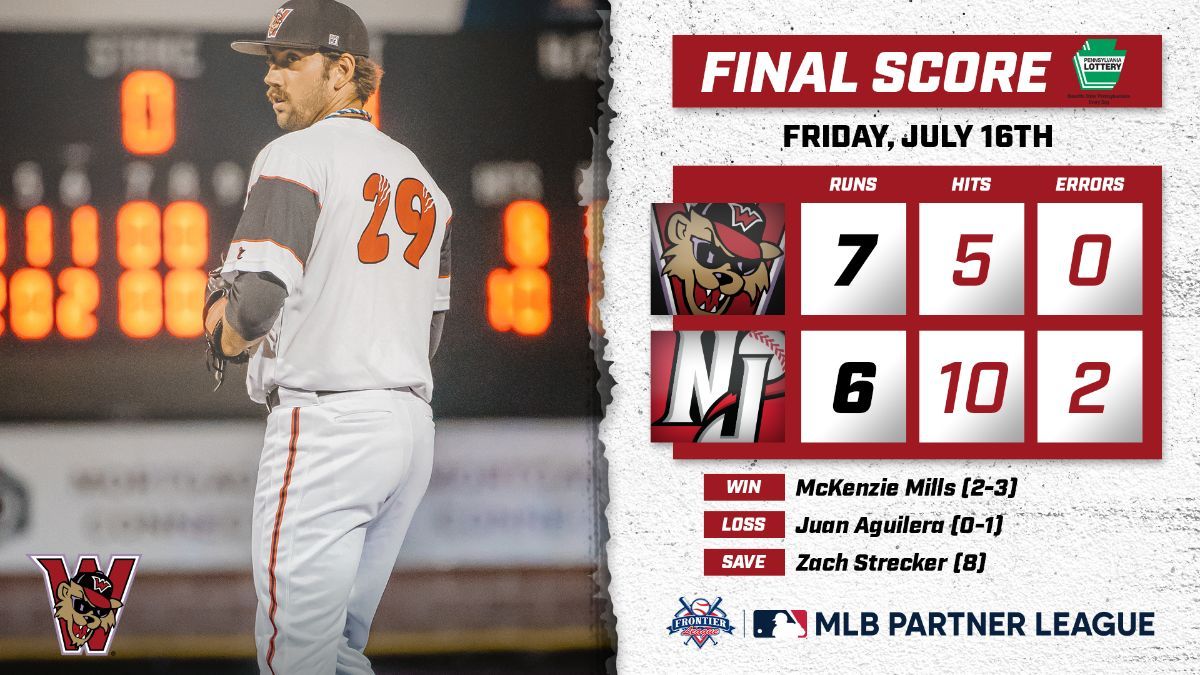 LITTLE FALLS, NJ (July 16) - Washington took advantage of drawing 11 walks and 12 total free passes and got hits in some key spots to win the series opener against the Jackals Friday afternoon, 7-6. In the win, Zach Strecker picked up his eighth save of the year and the 60th of his career, which puts him alone in second place on the Frontier League career saves leaderboards, breaking a tie with former Wild Thing and Frontier League Hall of Famer Jonathan Kountis.

Washington got the scoring started, stealing the first run of the game on a double steal with Grant Heyman going to second and Nick Ward home in the first inning. New Jersey got the next three before the Wild Things responded with an important five-run fourth inning, in which Washington scored three runs on bases-loaded walks and two more on a Heyman groundout and a Bralin Jackson sacrifice fly.

The Jackals fought back to make it a one-run game with singular runs in the fifth and sixth innings before both teams scored in the eighth. Jackson hit a single through the right side to plate Andrew Sohn for what turned out to be the game-winning run. Nicco Toni delivered his first home run to cut the Washington lead to 7-6 in the bottom of the eighth.

McKenzie Mills got the win, his second of the year, after 5.2 innings of five-run ball. It was the first time Mills received five or more runs of support this year. Ben Vicini got out of a jam after a walk before Jesus Balaguer pitched 1.2 innings and allowed the homer but fanned two. James Meeker had another scoreless outing, throwing one pitch to get Washington out of the eighth inning with the tying run on before Strecker pitched a clean ninth to earn the milestone save.

The win snaps a three-game skid for Washington and a seven-game road losing streak. The middle game of the series is tomorrow at 6:05 p.m. and features a matchup of right handers. Daren Osby will get the nod for Washington and be opposed by New Jersey's Chase Ingram.