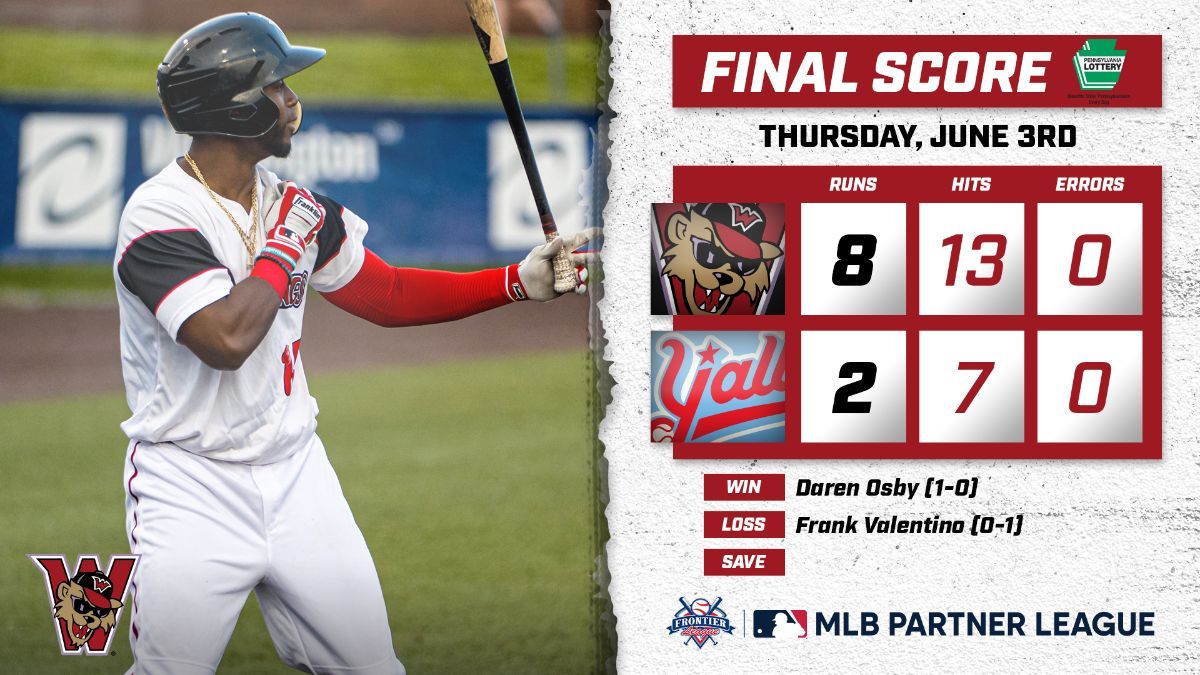 FLORENCE, Ky. (June 3) - The Wild Things belted three home runs and got solid pitching throughout the night to take the series finale and the finale of the eight-game road trip by a final of 8-2 over the Y'alls.

The scoring started early, as left fielder Bralin Jackson hit his first home run of the campaign and first as a professional since 2018 while with the Altoona Curve, to make it 1-0 Washington in the first. Hector Roa added his 47th home run as a Wild Thing and second this year in the second to double the lead. For Roa, the homer also served as his 317th career hit with Washington, which pulled him into a tie for second all time in that category with Mike Arbinger (2004-06). He passed Arbinger with his 318th career hit, a single, in his next plate appearance.

The two runs were all the Wild Things got off starter Frank Valentino but they'd add later. After Daren Osby completed his fifth scoreless inning and his final of the night, Washington added two more. Brian Sharp collected his first hit of the year to get the monkey off his back and it was a home run to make it 3-0. Later in the sixth, John Sansone plated Bralin Jackson with a base hit to make it 4-0.

Florence was able to get on the scoreboard in the home sixth on a two-run home run by Chad Sedio, his first of the year. The Wild Things immediately responded, however, with two in the seventh. Sharp singled home a run before Jackson did as well. Washington scored two in the eighth on bases loaded walks to Sharp and Jackson.

BJ Sabol, Jesus Balaguer and Zach Strecker each worked a scoreless frame to close the night for the win and get the win for Osby, his first as a Wild Thing.

Washington now returns home to do battle with Équipe Québec Friday through Sunday to start the 51-game home slate. The home opener tomorrow will see a fireworks show after the game. Saturday, the All-Decade team will be celebrated with appearances from six former Wild Things and a baseball card set giveaway for the first 1,000 fans. Finally on Sunday, it's a Kids Eat Free Sunday presented by PA Cyber and Nickelodeon Night at the yard.

First pitch Friday is slated for 7:05 p.m. Gates open at 6 p.m. with tickets still available at wildthingstickets.com and by calling the box office at 724-250-9555. Keven Pimentel will make the start for the Things.