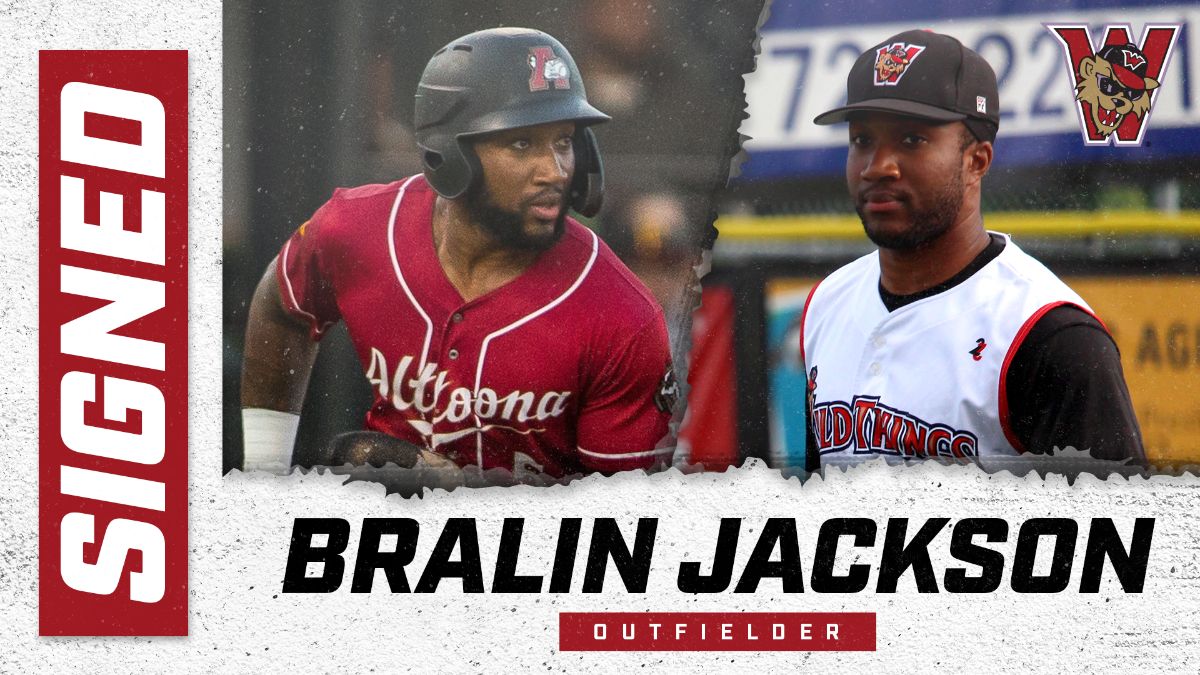 WASHINGTON, Pa. (February 16) - The Wild Things have announced the return of 2017 Frontier League All Star outfielder Bralin Jackson for the 2021 season. Jackson, who played a full season with Washington that year, was most recently with the Altoona Curve for two years in the Pittsburgh Pirates' organization.

In 2017 with Washington, Jackson appeared in 95 of 96 regular-season games and all four playoff games against the then-Florence Freedom. In the regular season the Kansas City, Missouri, native slashed .294/.325/.477 with 17 doubles, three triples and 16 home runs. Jackson drove in 76 runs and stole eight bases.

He was named All-Star Game MVP in Joliet after a 2-for-4 night with two RBI as the East Division beat the West 4-1. He was one of eight all stars that year, a team record.

"We are excited to bring in an MVP caliber player and person with Bralin’s return. His 2017 season speaks for itself. He took advantage of the opportunity in front of him and ultimately signed by the Pirates shortly after the year," said president and general manager Tony Buccilli. "Bralin is a proven run producer professionally and we value the consistency to his game. We know Bralin will prepare to be that impact player once again and we expect our fans eager to welcome him back.”

Manager Tom Vaeth, who was still with the Winnipeg Goldeyes when Jackson was in Washington the first time, is also excited.

"He was a big-time producer in his first stint with the Wild Things and I expect nothing less from him in his return. Bralin will slot right into the middle of the lineup and be a leader both on and off the field for us," said Vaeth. "In talking with Bralin, I can already tell how excited he is to come back to Washington and compete for a championship. His return instantly makes us a better ball club."

For Jackson, it's an opportunity to come back to a place he felt well-received.

"After becoming a free agent and knowing how much I still love the game, the Wild Things reached out to me and I prayerfully accepted," said Jackson. "I appreciated how I was received by the Wild Things' family and how there was a great team chemistry and effort during the season. The atmosphere and fans were great and that went into my decision [to come back]."

Jackson was the 2012 fifth-round pick of the Tampa Bay Rays out of Raytown South High School in Missouri. He began his affiliated career with 39 games for the GCL Rays in 2012. In the next three years, he went from the Appalachian League (Rk) to the New York-Penn League (A-) to the Midwest League (A). Over the three years, Jackson drove in 80 runs. In 2016, Jackson split time between Charlotte (A+) and the GCL Rays.

His 16 home runs in 2017 with the Wild Things were tied for fifth in the league, while his 76 RBI ranked second.
Jackson's contract was purchased following the season by the Pirates' organization. In 2018, Jackson appeared in 64 games for the Curve and drove in 14 runs with 11 extra-base hits. Then in 2019, he drove in 20 with 13 doubles and hit .257 for Altoona in 95 games played.
"One of my goals for myself would be to lead by a great example in the clubhouse and come prepared everyday," said Jackson. "A goal for the team would be to have fun while on the way to a championship."
Jackson will not be the only former Frontier League All Star returning to Washington's outfield. The team's next roster signing announcement is set for Tuesday, February 23.
PROUD SPONSORS OF THE WILD THINGS