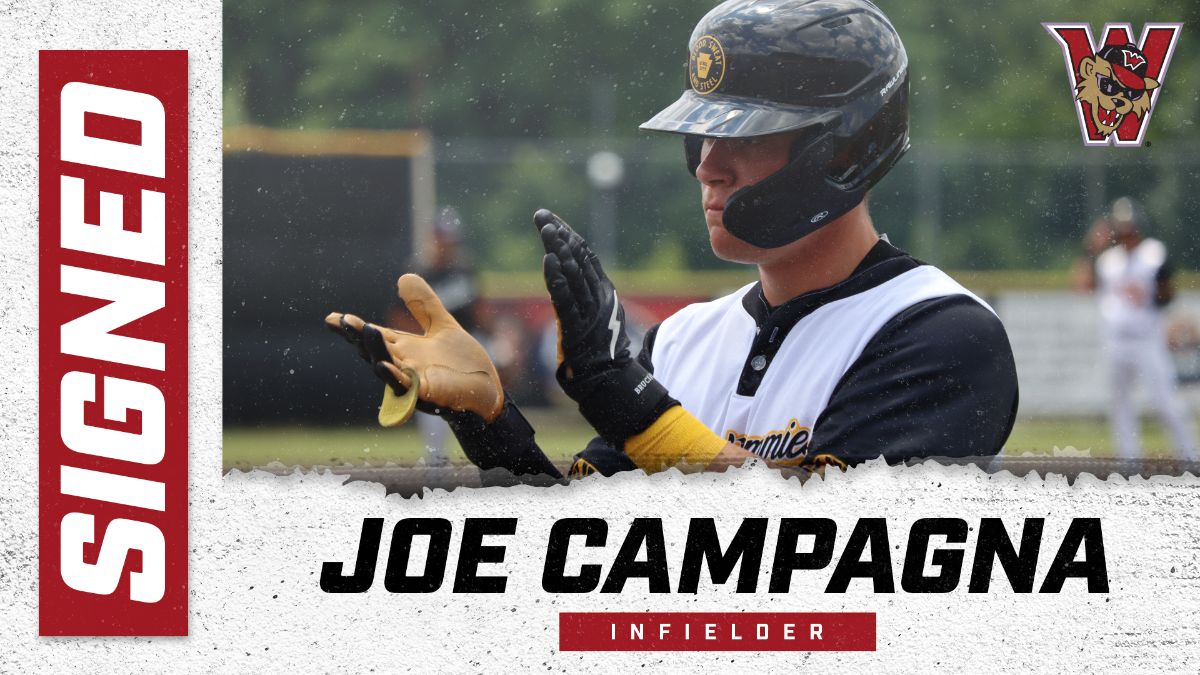 Campagna is not new to Wild Things Park though. Not only did he appear in the 2020 summer pod under the Wild Things’ umbrella with the Steel City Slammin’ Sammies, but he appeared in the 2014 WPIAL Class AAA baseball championship game, at then CONSOL Energy Park, the same year he was a Triple-A Player of the Year finalist for the Blackhawk Cougars.

With the Slammin’ Sammies this past summer, the New Castle, Pennsylvania native hit .303 (20-for-66), scored 22 times, had five doubles, clubbed five homers and drove in 12. Campagna was also hit by nine pitches and reached via free pass five more times than he punched out.

“Joe certainly took advantage of the opportunity before him this year. His added athleticism provides great versatility for us across the field,” said president and general manager Tony Buccilli. “We saw some mature traits in his offensive game as a situational hitter and with his work ethic.”

Campagna talked about the opportunity he was afforded by the Wild Things to play baseball during unprecedented times in 2020 as a big reason why he ultimately decided to return to play a Frontier League season with the Wild Things.

“The Washington Wild Things are a great organization from the top down. They gave me an opportunity to play ball during tough times in 2020 and I could not be more thankful for that,” said Campagna. “I feel comfortable around the staff and the ballpark feels like home. It felt right to sign [with the Wild Things]. I have enjoyed getting to know the staff, front office members, teammates and coaches, as they’re all stand up people that I like to associate myself with.”

Campagna stood out like a sore thumb in a good way at Blackhawk High School, playing for a few seasons alongside Rays’ two-way player Brendan McKay. In 2013, Campagna was named All-WPIAL as a designated hitter. In 2014, he had another great season, and was a finalist for the aforementioned Class Triple-A Player of the Year award. His senior season was his best. Campagna was WPIAL Class AAA Player of the Year in 2015, Beaver County Times Player of the Year, Pittsburgh Post-Gazette Player of the Year. He did not strike out that entire season and had an eight-RBI game, a school record.

He would matriculate to Slippery Rock University, where he finished top 10 in school history in home runs and RBI. He is top 20 in several other categories too. For The Rock, Campagna was a two-time All-PSAC West honoree, a six-time All-Region selection and a D2CCA All-American in 2019. Over the course of his career, Campagna slashed .317/.416/.567 with 28 homers, 125 RBI, 36 doubles and five triples. His best year was his senior year, when he connected with 10 long balls and drove in 42 and only struck out 26 times in 181 plate appearances. After graduating, Campagna made a stop in the United Shore Professional Baseball League with the Utica Unicorns.

“I love to win, and I feel like we have a team that could go all the way and take the whole thing,” he said.

Campagna is just the first to officially be announced for the 2021 roster by the team, with more to come in the coming weeks as the offseason gets going. Be sure to stay close to the Wild Things’ social media platforms and team website for news and information regarding the roster for 2021 and so much more.

The Washington Wild Things are a professional baseball team in the Frontier League that plays in Washington, PA. Since their inception in 2002, the Wild Things have won six division titles and earned numerous playoff appearances. Fans and media can stay aware of all the happenings in the Wild Things' organization by following the team's social media platforms and website, washingtonwildthings.com. For other inquiries, call the front office at 724-250-9555.